Gorgany Mountains is considered to be the wildest region in the Ukraine. Nature is enormously untouched. The environment here is almost the purest in the whole Carpathians. The mountains of this region are of rock, sandstone, what makes them rather interesting to trek. Simultaneously, Gorgany is the least accessible part of the Ukrainian Carpathians. It is hard to reach because of its very steep slopes and stony mountains strewn with boulders, called “gorgany” by local people. That is why this unique area forms the Gorgany Natural Reserve.
The trek route includes the main and the most interesting peaks of the Gorgany region:
- Khomiak Mountain (1542 m): probably, the most recognizable summit of the whole Ukrainian Carpathians because of its’ regular conic shape.
- Doboshanka Mountain (1755 m): the slopes of the mountain are strewn with boulders, what makes the summit difficult to climb.

At 3 p.m. we depart from Lviv to the mountains by train. At 10 p.m. We arrive to the village Tatariv and stay overnight at a local hotel.

Our trek starts from the sweep of the road to Palianytsia village (Bukovel). We have to take right side of the road as we have to notice the marked path directly to the main point of our trek today – Khomiak Mountain (1542 m). The path is well-marked and goes lacet up to the small meadow Baranya (located at the col between to peaks: Khomyak and Greblia Mountains). It means that a few meters left to the top. Though, they are quite steep. Khomiak mountain is well-identified from the other summits as it is of regular conic shape. From the top you will see Petros (2020m) and Hoverla (2061m) – the highest mountains in Ukraine. After watching splendid views, we are sloping to the pasture Khomiakiv (located on the col between Khomiak and Syniak Mountains)- a place to stay overnight. This valley has perfect conditions to camp: shepherds’ hut, enough wood, water nearby, marvelous views on the all sides.
Distance to walk: 14 km.
Overfall of the height: 1280 m.
Short characteristic of the day route: 1km along the road to the sweep to the well-marked path, which goes lacet up to the top of the Khomiak Mountain; short steep descent to the Khomiakiv pasture.
Approximate time of the walk: 6 hours 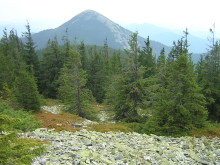 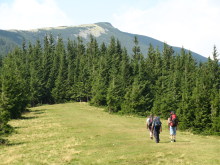 Today we are supposed to climb the next two summits of the ridge: Syniak Mountain (1665 m) and Malyi Ghorgan Mt. (1593 m). Both are strewn with boulders. Moreover, you should be twice careful as Malyi Gorgan Mountain is formed of scree. This day the route will lie up above 1400m, so during all the way you will watch beautiful mountain scenery. To stay overnight, we have to slope to the Bladzhyv pasture with the shepherds’ hut. You will have an opportunity to taste the famous “bryndza” (local sheep cheese) and milk.
Distance to walk: 12 km.
Overfall of the height: 725 m.
Short characteristic of the day route: the well-marked path during all the trekking day.
Approximate time of the walk: 6 hours 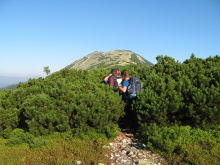 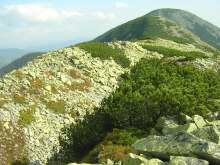 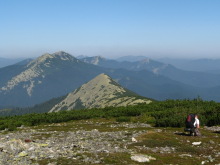 If you feel strong enough to climb further, we can reach the highest peak of the ridge – Doboshanka Mountain (1775 m) and then descent by the steep slope to our camping place on the picturesque meadow – the last overnight place in the mountains. In case, if you feel enough of climbing, we can skip the peak of Doboshanka Mt. and take the direct path to the Pereslop pass without any prominent ascents.
Distance to walk: 18 km / 12 km.
Overfall of the height: 1130m / 250 m.
Short characteristic of the day route: the well-marked path in both cases;
Approximate time of the walk: 8 hours / 6 hours. 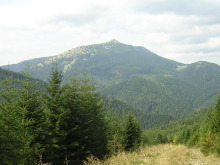 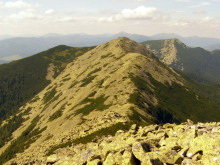 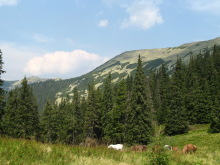 This day we just slope to Yaremche town by the good dirt road. In the late afternoon we go back by the local bus to Lviv.
Distance to walk: 19 km;
Overfall of the height: 650 m;
Short characteristic of the day route: the well-marked dirt road and path;
Approximate time of the walk: 8 hours;

Don’t overload yourself because all your luggage and food you will have to carry yourself.
The weather in the mountains is unpredictable, it often rains, so you should take a raincoat and put all your things that could get wet into a plastic bags.
AdventureCarpathians Trekking in the Central Gorgany is an adventure trekking tour, so be ready for unusual things and new experience. During the tour you will have to camp, learn how to cook on the open fire, survive without civilization and not to get lost in the mountains. Tour time-table may vary because it depends on the things that we can not predict (for example the weather).

Tour price is being calculated individually depending on the number of the persons who want join the trek.

The tour cost will include:
- transportation from Lviv to the Carpathians and back by mini-bus;
- food during the trip;
- guide fee;
- insurance.

To reserve the tour please send an e-mail to carpathians@inlviv.com, specifying:
- your name and surname, country;
- how many people you are;
- contact phone number and e-mail;
- the name of the tour;
- starting date,

After the confirmation, we’ll ask you to pay a deposit – 20 Euro per person. The rest you can pay upon the arrival.

Please, check what to take with you in a mountain trip.

The tour starts from Lviv, but alternative pick up places could be arranged.
We could offer you to stay a few days after the tour in Lviv. And here you can find information about the hotels, apartments and hostels.

The Gorgany Mountains (or Gorganes).
The central part of the Carpathian Beskyds, situated between the Mizunka River in the west and the Prut River in the east, and between the limits of the Carpathian Mountains in the north and the Middle-Carpathian Depression in the south. Covering an area of approximately 2,500 sq km, the Gorgany are the least accessible and least populated part of the Ukrainian Carpathians. They are formed mostly of hard and resistant sandstones. The transverse valleys of the Mizunka River, the Svicha River, the Chechva River, the Limnytsia River, the Bystrytsia Nadvirnianska River, the Bystrytsia Solotvynska River, and the Prut River dissecting the longitudinal ridges have transformed the latticed structure of the mountains into a feathered, and sometimes insular, form.

The elevation of the mountains increases from 1,400 m in the west (Mount Gorgan Vyshkivskyi at 1,448 m) to 1,800 m in the Limnytsia Basin (the peaks: Grofa at 1,748 m, Popadia at 1,742 m, Syvulia at 1,836 m, Ihrovyshche at 1,807 m, and Vysoka at 1,805 m) and then decreases towards the east (the peaks: Doboshanka at 1,760 m, Syniak at 1,664 m, and Khomiak at 1,544 m). The peaks, which are often separated from one another by deep ravines, are more differentiated than the peaks in other parts of the Beskyds. Extensive fields (up to 5 sq km) of sandstone boulders (the result of wind erosion) cover the higher peaks, particularly their southern slopes, and weak traces of past glaciation are found on the highest slopes. River valleys in the Gorgany are deeply incised (up to 1,000 m) and narrow and their slopes are steep. The rivers have an irregular flow, which is often interrupted by rapids and falls (eg, the Bukhtovets River and the Prut River). The Gorgany remain largely forested. Eighty percent of their total area is covered by forests consisting mostly of spruce; mixed forests are found only on the periphery and in Transcarpathia. Above the upper forest line (at 1,450–1,550 m) Swiss mountain pine is more widespread than in other parts of the Ukrainian Carpathian Mountains. Because of this and the sandstone fields, mountain meadows seldom occur in the Gorgany. The Beskyds lying between the two arms of the Middle-Carpathian Depression represent a transitional form between the landscape of the Gorgany and that of the Polonynian Beskyd. This is particularly evident in the basin of the upper Tereblia River in Transcarpathia (the peaks: Kanch, 1,583 m; Strimba, 1,723 m; Streminis, 1,599 m).

Because of their inhospitable environment, the Gorgany Mountains are very sparsely populated. In the western and central Gorgany, inhabited by the Boikos, villages are situated mostly on the mountain periphery; the interior is penetrated only by settlements of the Hutsuls in the valleys of the Bystrytsia Nadvirnianska River and Prut River. The towns of Nadvirna and Diliatyn are located on the periphery. Non-Ukrainians — Jews, Poles, and Germans — appeared in this region in the 19th century when the forests began to be commercially exploited; in 1939 they composed close to 10 percent of the total population. These minorities are no longer found there.

The forests are the principal natural resource of the Gorgany. Their exploitation was facilitated in the late 19th century by the construction of a dense network of narrow-gauge track on which timber was transported to large lumber mills in Vyhoda, Broshniv-Osada, Nadvirna, and other towns. A small petroleum industry was located in Bytkiv, Pasichna, and Ripne. The health resorts of the Prut River valley—Vorokhta, Yaremche, Yamne, Mykulychyn, and others—acquired a nation-wide reputation; their development was facilitated by the only railroad in the Gorgany, which links the Prut River valley with Transcarpathia through the Tatarskyi Pass.