Exciting adventurous hike in the Carpathian Mountains along a picturesque Borzhava ridge. Competition between two teams using various strike-ball (a lighter version of paint-ball) game weapons and working out your own “war” strategy and tactics. Conquer or defend an abandoned Soviet military base, which used to be one of the top secret and most important sites during the Cold war times. A great opportunity to assay your strength in a real trek with overnights in tents, to plan and fulfill your own defense and assault strategy, to take part in different militant games, competitions and contests. Strong impressions are guaranteed!

Apply at least 2 weeks before the start of the game. You can try to apply later but we give no guarantee that your application will be accepted.

The Borzhava ridge is one the most popular destinations among hikers and adventure lovers: easy access by the railway or car; steep but gradual slopes, curvy paths, well-downtrodden stroll along the ridge, magnificent overview on the neighboring ranges. The medium hight of the ridge is above 1200 m. The slopes are covered with the beech forests up to 1000 m. The upper line of the ridge is treeless and formed by the large pastures . No wonder that the Soviet military base was located there. Now it is abandoned. This makes it a perfect place to experience an unforgettable adventure.
The game is considered for 2 teams (5-9 people in each team). The maximum number of people taking part in one game is 18. The minimum is 5. If the number of registered participants is less than 8 than one team is formed and the other team will be a local scouts group. 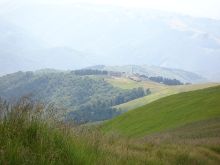 Day 1
Just upon the arrival to Lviv and checking in a hotel, meet with people. Before we depart to the mountains tomorrow we ought to listen the introduction to the  game and review its’ rules. We should dedicate the evening for preparing to the departure and checking the equipment. 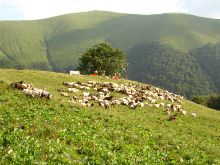 Day 2
Early in the morning we depart to the start-point in the mountains – Volovets town. Two different routes are prepared for the groups so that they start hiking along the ascent path to the ridge and then along it directly to the abandoned base. Team1 arrives in the evening to the military base site. Team2 stay camping in the mountains. 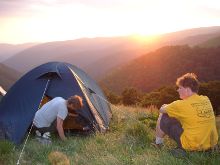 Day 3 It is a big game day. Team1 discovers the base and develops the defense strategy. Team 2 finally hikes to the military base and makes an assault. After the end of the game everyone joins for an open fire outdoor party, awarding the winners.
Day 4 That is another great day in the Carpathian Mountains. While staying near the military base we will play around and organize some small competitions and “war” games. 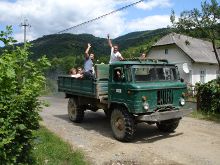 Day 5
After having a final breakfast in the mountains we will start hiking back to the finish-point – Volovets town and returning back to Lviv in the evening.
Day 6
You can either stay in Lviv, continuing the acquaintance with this marvelous city, or depart back home.