Two-day tour to Kamianets-Podilskyi (guided tour around the old city and the fortress is included into the cost) and Hotyn fortress is composed for real lovers of good tourism. This tour has the most tight itinerary as during 2 days you will make a trip around West Ukraine (that is 800 km of distance). In any case, this tour is worth taking as you will be able to recover after a long trip in a spa-center of a very good hotel. 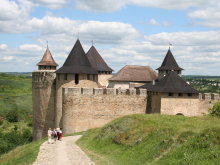 Hotyn
The highlight of the Hotyn region is an ancient majestic city – the fortress of Hotyn. National memory has kept many beautiful legends about a history of this land. One of them tells that during old times malicious conquerors surrounded a powerful fortress. Defenders repeatedly beat off attacks, but forces were unequal and enemies finally taken a fortress. They grasped the daughter of the commandant. 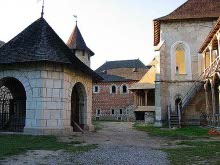 However the girl did not want to obey aggressors and those after inhuman mockeries have immured her in a wall of a fortress.Till now on this place it is possible to see images of a Turkish jug for water and a wet stain from tears of the girl. Almost every spring night she leaves a wall and calls the father and the groom who were lost in fight, and waters with tears the native ground which gives generous crops, the rivers and lakes with water. This sad and lyrical legend became a basis for a plot of symbols of area. 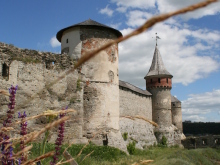 Kamianets-Podilskyi
Kamianets-Podilskyi is about 25km north of the point where Moldova and Romania meet at the Ukrainian border. This old town has stood since at least the 11th century on a sheer-walled rock island carved out of the steppe by a sharp loop in the Smotrych River. While questions remain as to when the city was first founded, evidence of local indigenous Ukrainian settlement traces back at least to the 6th century. 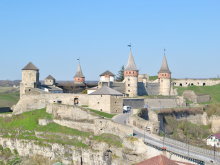 Situated on important trade routes, both overland (east-west) and by water (north-south), the settlement experienced growth. Having survived the 13th century Mongol invasions, the community continued to prosper under a variety of different foreign rulers. With the establishment of the Podillian Roman Catholic bishopric in Kamianets-Podilskyi in 1375, the city became one of Rome’s primary bastions in the East, competing with the influence of Orthodoxy and checking the spread of Islam (Tartars and later Ottomans). 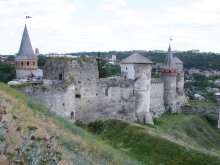 In time, the more prestigious Catholic religious Orders established monasteries within the city – including the Dominicans (c. 1370), Franciscans (1400), and the Discalce Carmelites (1623); the Jesuits established both a mission (1608) and a college (1610). Yet unlike Western Europe, where Catholic prominence often brought about religious repressions, both the Ukrainian and the Armenian Orthodox churches continued to grow and prosper within the city walls.

While religious tolerance would begin to decline by the 17th century, for three hundred years a spirit of religious toleration was maintained for the city’s three dominant communities (Ukrainian, Polish and Armenian). The south-western bridge, for centuries the only link between the town and the mainland, is guarded by a nine-towered stone castle that dates from the 16th century. Most of the towers are open to visitors, and many offer great views of the town and the surrounding countryside.

Tour group fee: 1200 UAH per person.
Price includes: transportation by bus, guides’ services in Ukrainian language. accommodation, medical insurance.
Price does not include: cruise on the boat on Dnister river (130 UAH per person), entrance tickets to the fortresses (150 UAH per person).