An interesting overview bike tour through the parks and green areas of Lviv, which is suitable for beginners as well as for amateurs. You can go through Pohulianka park and Vynnykivskyi forest-park, enjoy nature and fresh air within the noisy city, stop and have a rest near the Vynnykivskyi lake and Devil rocks. 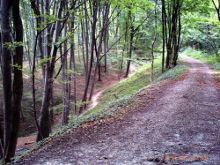 We start our bike tour from Danylo Halytskyi monument and go along Levytskoho str. to the park Pohulianka. Up to 19th century the territory of the park was located on the outskirts of the city. In the middle of 19th century Jan Klein bought the park. He rearranged this park and built a brewery. Subsequently, Klein founded a popular restaurant, which quickly became the object of his attention, and the park regressed. However, the central alley continues to be a favourite place for the walks of Lviv prosperous audience(obviously, the name of the park is set right at that time). In 1940 the city authorities decided to locate an urban recreational park on Pohulianka. But this plan was not accomplished due to the beginning of war.

The next plan of the park reconstruction almost completely reproduced its original appearance. Nowadays Pohulianka is a forest-park with the well-arranged central alley (which we will go along up to the beginning of Kytaiska str.) and the lakes around. Kytaiska str. abuts upon Vynnykivskyi park. The main interesting sites of the park are the artificial lake and the Devil rocks (“Chatovi”). We ride along the forest paths to the lake, where we can stop for a rest. Then cross the road from Vynnyky village to Lviv, go up about 300 -400 m, and overcome another 200 m right to the Devil rocks. The name “chatovi” is associated with the guards (“chatovi” in Ukrainian), who were sitting on the rocks and watching if the Tatars approach to the city.

The current name is partly taken from the legend about the devil, who was carrying a stone to throw it on the St. George Cathedral. But he was afraid of the bell, fell under the heavy load, and sank into the ground. We are going back to Lviv through Lysynychi village, which we are going to down the forest path. Further it turns into a dirt road, which will lead us to Hlynianskyi Trakt str. We are going along this street and reach Lychakivska str, which completes our biking trip.

Remember to bring a lunch box.