Two Castles and a Monastery

Two Castles and a Monastery

This one-day tour includes two popular castles – Olesko and Pidhirtsi - and an old monastery in Pidkamin. These places fully illustrate the historical value of Lviv region. All the sights are located in a short distance from each other (15-30 minutes of drive) in small authentic villages. The most beautiful is Olesko castle based on a hill that can be observed from a long distance. Besides, Olesko castle has a medieval restaurant where you can have a delicious meal. Pidhirtsi castle is considered to be the most valuable palace-garden complex in Ukraine. It contains defensive system, palace, church and a park. Pidkamin is not included to the standard popular routes around Lviv. Nevertheless, the old monastery on the hill with a small park nearby and the rock with the old cossacks' crosses around is worth visiting.

That is definitely a unique one-day tour, as the standard route of the Castle Tour with the visits of Olesko and Pidhirtsi castles does not include Pidkamin – an ancient town, where you can watch an old monastery, a rock and the old cossack’s crosses around. The tour is worth booking as you will indeed make certain of the historical inestimable wealth of Ukraine. You will feel like in the time machine: starting from the peripeteias of the Royal Household to the transformations of castles and the monastery into the museums, crumbling objects that are under construction and restoration.
These three objects of a trip are located around Lviv near each other. It is a perfect solution as you will spend on the road little time. 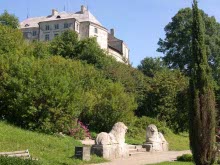 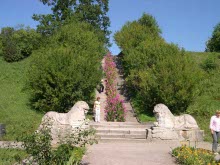 The tour starts at 10.00 A.M. departing from Lviv. It will take about an hour or so to get to the first object – the Olesko Castle. You will watch the castle right from the road as it is located on the hill. It is an outstanding architectural and historic monument of the 13th – 18th centuries, once a strong fortress of old Rus in the 14th century. Later, in the 15th – 16th century, Olesko Castle was turned into a palace for aristocracy and remodelled in Italian Renaissance style in 1620s. The famous Polish king Jan III Sobieski was born there in 1629. The king often lived in Olesko Castle and collected numerous art works. Afterwards the castle belonged to Rzewuski family. Olesko Castle became a museum after restoration in 1965-1975. Hundreds of unique paintings, sculptures and applied arts are exhibited in the museum. There are icons, portraits, still-lives, the monumental picture of the Battle of Vienna, old furniture and wooden sculptures among them. Olesko Castle is surrounded by a nice park with some sculptures.

You can also have a lunch in the popular archaized restaurant “Hrydnycia” right in Olesko Castle. Mostly, it offers an old Ukrainian cuisine and self-producted liqueurs. 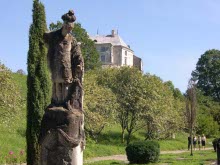 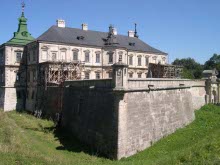 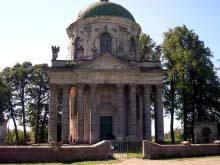 It takes no more than 15 minutes to get to the Pidhirtsi Castle. It represents the late Renaissance style dating to 1635-1640. It belonged to the aristocratic Rzewuski family, was not intended as a defense structure and should be more accurately called a palace. Pidhirtsi Castle is surrounded by a moat and includes a Baroque church of St. Joseph (1752-1766). A wall with a heavy gate and a park with old trees also belong to it. Pidhirtsi Castle has been under restoration after years when it was used as a Soviet hospital. It may take many years before it regains its previous glory. However visitors are admitted and have to use their imagination when looking at once grand interiors. You will be also invited to take a short walk to see a beautiful wooden church of St. Michael from 1720. 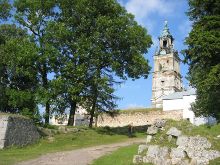 Pidkamin is located only in about 30 minutes from Pidhirtsi. The village takes its name (translatable into English as “below the rock”) from an inselberg, called the “devils rock”, located on the adjacent hill. Pidkamin became known for a Dominican monastery. It was first established by the twelve monks from a monastery established by Saint Hyacinth in Kyiv, who were forced to flee from the city when it was ravaged by Mongols. A fortified abbey  was constructed during the 17th century. Pidkamin hosted a wonder working icon of the Blessed Virgin Mary (a copy of the famous Protectress of the Roman People from the Santa Maria Maggiore Basilica in Rome), crowned in 1727 by the Latin Rite bishop of Lutsk Stefan Rupniewski, assisted by other Roman and Greek Catholic bishops, with a crown conferred by Pope Benedict XIII. After World War II the icon was removed from Pidkamin to rescue it from communists and today remains in the Dominican church of St. Adalbert in Wroclaw, Poland. Pidkamin was largely destroyed by Russian artillery in 1915 during World War I. After World War II in 1946 the monastery was closed by the soviets and turned into a jail. Later the monastery was used as psychiatric hospital, which still exists, and the church was turned into a stable. After the collapse of the soviet union and the emergence of independent Ukraine, the ruins of the monastery were given to Ukrainian Greek Catholic Studite Monks.

We will come back to Lviv till at 7 P.M. with plenty of impressions and memories.

* The tour is non-guided. You will be provided with a map of Lviv region and the print-outs about the sights that you are going to visit.You can take an English-speaking guide with you at the additional fee.